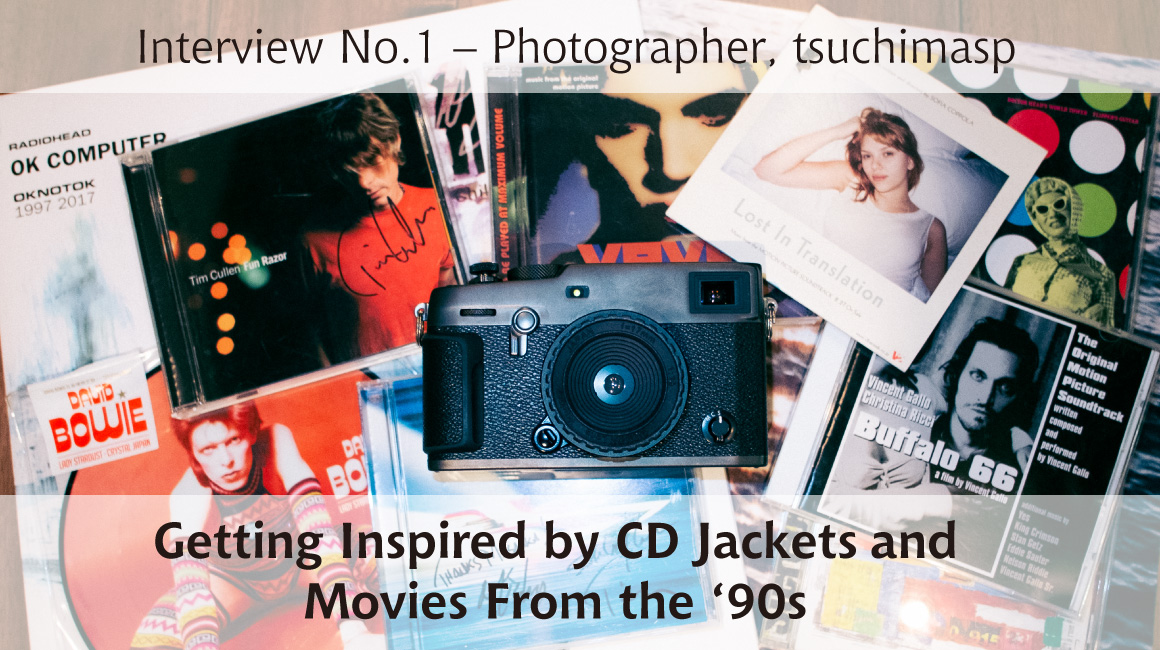 We have interviewed tsuchimasp who is active on Instagram sharing portraits and snapshots of captivating women. Having the concept of “Imaginary CD Jacket,” his works reminds us of the excitement that we used to experience when the music subscription system was still not familiar; Looking at the brand new CD jacket just purchased, heart fluttered in anticipation wondering how the new songs would be like.

It all started when I traveled to the US to see a concert.

－ Would you introduce yourself briefly?

tsuchimasp : Hi, I’m tsuchimasp. I work for a company as my main job while taking music-related photographs on the other hand. I mainly share portraits on SNS.

－ Where is the current main base of your activity?

tsuchimasp :  I live in Kobe so I’m mainly active around the Kansai area. But since I have business trips all around Japan with my main job, I take photos wherever I go as well.

－ What led you to start photographing?

tsuchimasp : I once traveled to the US to see my favorite band play in a concert. Through many coincidences,  I was able to meet the band members in person before the concert started. I didn’t want to miss this great chance so I negotiated with them to film their concert, and they gladly agreed to it. But at that time, iPhone and an ordinary camcorder were the only recording devices I had. Regretting not owning a better camera, I bought an SLR as soon as I came back to Japan. This led me to start photographing.

－ Any awards achieved or have you ever held a solo exhibition?

tsuchimasp : I’ve never even applied to a contest, but I have been holding an annual solo exhibition since 2019. Until last year, it was only held in the Kansai area but I was able to hold it in Fukuoka as well this year.

Getting inspired by CD jackets and movies from the ‘90s.

－ Tell us about the style you go for and the concept of your woks.

tsuchimasp : For portraits, I often photograph under the theme of “Imaginary CD jacket.” I really love music and wanted to play in a band when I was young. But I couldn’t play any instrument…(Laughter)

So I aim for shooting photos that I want to use as my CD jacket if I was ever able to play in a band.

－ What is something that you most care about when you take photos?

tsuchimasp : Choosing a model and creating the atmosphere of photographing is something I care about the most. First of all, “The boy/girl I wanted to become” is the criteria for choosing a model. And while photographing, I’d rather “hang out with the model and take photos on the way” rather than “being with him/her only to shoot photos.”

－ Where does the inspiration come from the most?

tsuchimasp :  I often get inspired by CD jackets and movies from the ’90s. Many people tell me that my photos have a film taste but actually, film photography was the mainstream in the era I like the most. So as for myself, the feeling of wanting to shoot photos with the ‘90s taste is bigger than shooting film-tasted images. As a result, I tend to get comments that my works have a film touch.

－ Which camera and lens do you use mainly?

tsuchimasp : For portraits and snapshots, I use X-Pro3 and X-M1. The most frequently used lenses are XF35mmF1.4R and Wtulens. I especially like the combination of X-M1 and Wtulens because I could carry them around as if I was carrying a compact digital camera.

Wtulens is in an interesting position.

－ Tell us the reasons why you use Wtulens.

tsuchimasp : First of all, as I mentioned before, it fits in my pocket with my X-M1. And the best thing of all is the impression that comes out. It has this just right ambiguity which enables me to shoot around more casually.

The lenses these days have higher image quality. But on the other hand, there are still a certain number of photographers who likes the classical impression and uses old lenses.

Come to think of it, Wtulens doesn’t have high image quality, but it’s not considered an old lens as QUICKSNAP is still being sold in stores… It’s in an interesting position.

－ In what kind of situation do you use Wtulens?

tsuchimasp : Wtulens is my main lens. I use other lenses only in situations where flash cannot be used such as inside a building, or where I want to blur out the background.

A community to exchange information.

－ Is there any request for GIZMON?

tsuchimasp :  Please create a community where we could share information such as how one uses his lens or how one’s photo came out. Or maybe holding a discussion meeting would also be interesting.

There’s no basis but people who prefer lenses such as Utulens and Wtulens could be minorities but I believe there’s still a certain number of them. And they are hungry for information. At least I am. (Laughter)

－ Tell us about your future activities.

tsuchimasp : I’d like to hold one more solo exhibition by the end of the year. It might be interesting to exhibit photos that were only taken with Wtulens.

Begin typing your search term above and press enter to search. Press ESC to cancel.